The Market Week in Review

Despite GDP revealing that the U.S. economy shrunk by 4.8% in the first quarter of 2019, the U.S. stock market ended the week slightly higher amid optimism of a coronavirus treatment.  Interest rates moved higher as the 10-year treasury yield rose from 0.60% to 0.64%.  However, shorter-term yields fell slightly as the Fed left the federal funds rate near zero.  Consequently, the spread between the 10-year treasury yield and the 2-year treasury yield widened from 0.38% to 0.44%.  The price of gold fell over 2.0% to $1,707 an ounce as demand for the haven metal falls.  The price of crude oil rose nearly 10% on the week as the recent agreement between major oil producers to cut oil production begins.

You don’t have to be a hard-core value investor to recognize that buying assets on the cheap usually aligns with high(er) expected returns vs. investing when assets are dear. Can you bank on it? No, but dismissing the idea is still asking for trouble.

The value factor, after all, has been stress tested for as long as investing has been around and for the most part it’s proven to be durable strategy through. But success rarely comes without pain. Value investing has certainly been under pressure in recent years, but that’s nothing new. In the late-1990s, for example, value trailed for several years before rebounding.

Is value’s troubles of late a sign that it’s different this time?  The underperformance of value has been unusually lengthy, inspiring some critics to claim that the strategy is dead.

Consider one measure of this risk factor: the cumulative net change in daily returns for two U.S. large-cap equity ETF proxies of growth and value: iShares S&P 500 Growth (IVW) and iShares S&P 500 Value (IVE), as shown in the nearby chart. When this benchmark is rising, growth is outperforming; when the line falls, value has the upper hand.

Value’s previous winning streak ran for roughly seven years, ending in 2007. Since then, growth has dominated, save for several short-term interruptions when value briefly rebounded. But the broad pattern has remained intact in the growth camp and this year’s coronavirus-triggered crisis hasn’t reversed growth’s fortunes, at least not yet.

Professors Eugene Fama and Ken French – the academic team that popularized the value factor in the 1990s with a series of seminal research papers — recently looked at the strategy with fresh eyes in a study released in January (“The Value Premium”).

One possible explanation: inflation is better for value stocks, and lately there hasn’t been much.  The rationale is that companies whose stocks are considered to be a good value typically have stronger current earnings and less debt than growth stocks.  When inflation is high, the future earnings promised by growth stocks are more heavily discounted and interest rates typically rise.

If true, the forgoing could explain why the Fama-French research referred to above revealed a value premium.  As famed financial theorist and neurologist William Bernstein has written:

The original Fama-French paper covered a period of very high inflation, the years 1963-1990, and consequently showed a robust value effect. Towards the end of that period, interest rates and inflation commenced a long and powerful decline, which continues to this day—just the sort of environment expected to favor growth stocks….

Despite the uncertainty, there’s a strong case for expecting that value will revive… eventually. The logic is that behavioral issues create value opportunities – investors as a group go to extremes. Unless you expect that the crowd has had an attitude adjustment that derails millennia of habit, it’s likely that value’s performance edge will one day return.

Meantime, the latest dry spell offers a reminder: a hefty dose of patience is often required for success in this corner. That’s in short supply for the average investor, who tends to abandon the strategy when it doesn’t deliver satisfactory results early on. Of course, that tendency explains volumes for why patient value investors can reap the benefits.

Rising Deficits and Stable Tax Rates? Don’t Count On It

The coronavirus crisis won’t last forever, but the aftershocks will resonate for years, perhaps decades. That includes taxes, which will likely rise, no matter who wins the White House this November.

The catalyst, of course, is a surge in government spending to offset some (most?) of the loss linked to the partial shutdown of the economy to battle Covid-19. A dramatic increase in public expenditures doesn’t automatically lead to higher tax rates, but it sure skews the odds toward that outcome.

The obvious example in history: World War II. The ramp-up in spending to finance the war effort led to a dramatic rise in government outlays. In the second half of the 1930s, federal government spending as a percentage of the economy (gross domestic product) was relatively steady at around 10%, according to analysis by the Collaborative Fund, a venture capital firm. By 1942, the year after the bombing of Pearl Harbor, outlays jumped to 24% of GDP and went higher still in 1942-1945, exceeding 40% in each of those years, when the U.S. was fully engaged in the war. 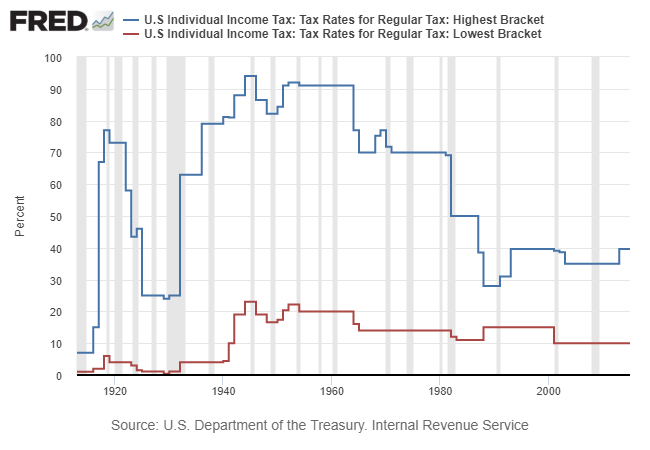 Was it coincidence that tax rates rose sharply in the years after the war? Let’s just say that it would have been surprising if rates didn’t increase in concert with World War II’s spending increases.

Another way to measure tax burdens is in relation to the economy. The Collaborative Fund reports that before World War II, tax revenue as a percent of GDP remained no higher than 7.8%. After the war, it averaged 14% but no lower than 11%.

Regime shifts for government spending habits, in other words, can have long-lasting effects. How will the current crisis-inspired spending influence tax rates? Unclear at this point, but the path of least resistance is almost certainly higher.

One factor that will likely drive taxes up is the ballooning deficit. New estimates released in April by the Congressional Budget Office project that the federal deficit will rise to $3.7 trillion in fiscal year 2020, easing to a mere $2.1 trillion in FY2021. That’s up sharply from CBO’s March forecasts of roughly $1 trillion for each of those years.

The critical question: Will we pay the debt back? Maybe, possibly, but not necessarily. Ideally, the country’s grows its way out of the hole, a la the economic boom that followed World War II. But let’s not forget that even a robust period of expansion didn’t stop the government from raising tax rates in the post-war era.

The risk now is that growth in the years ahead will be relatively weak, as it was following the Great Recession of 2008-2009. Although the previous expansion was the longest on record (before it was derailed by the coronavirus), it was also one of the weakest.

Is the economic outlook any better today? Maybe, but there’s plenty of reasons to argue otherwise, including an aging US demographic and heightened uncertainty as the country struggles to find its footing in a post-Covid-19 world.

Meanwhile, some economists advise that because interest rates are low, and are likely to stay low for the foreseeable future and perhaps even longer, the government can borrow cheaply to finance and service the growing deficit. As Paul Krugman points out, “real interest rates — rates on government bonds protected against inflation — are negative. So the burden of the additional debt as measured by the rise in federal interest payments will be negligible.”

He concludes: “The bottom line is that right now, the only thing we have to fear from deficits is deficit fear itself.”

Even if that’s true, it would be macro miracle if tax rates don’t rise. The future’s uncertain, but expecting that exploding red ink will align with stable or lower taxes is expecting too much.

What’s The Biggest Risk For Investors?

Recent data from Dalbar, a consultancy, reminds that the biggest headwind to earning a respectable return is behavioral risk. Consider how various asset classes stack up against the performance realized by the average investor. As the nearby chart reveals (courtesy of J.P. Morgan), we’ve met the enemy and he is us.

For the decade through 2019, returns were buoyant in most corners of the capital and commodity markets, including a 6.1% annualized gain for US stocks (S&P 500) and blow-out gain of 11.6% for real estate investment trusts (REITs). For the average investor, however, the last decade was a dud thanks to realized gain of just 1.9% for the ordinary Joe’s portfolio.

How does the average investor manage to earn such a weak performance during a decade of bull markets nearly everywhere? The usual suspects tell the tale, including a habit of selling at bottoms, buying at tops and generally letting emotion run the show rather than focusing on the numbers.

The solution is, on paper, easy, such as favoring low-cost index funds over expensive actively run products and sticking to investing rules rather than fear and greed for portfolio rebalancing decisions.

A minority investors will rise to the challenge. For everyone else, the little gray cells between your ears are the main threat to earning respectable returns.

By James Picerno, Director of Analytics

“Happiness depends more on how life strikes you than on what happens.”