Welcome to the inaugural edition of Perspectives + Prospects, a weekly newsletter for clients and friends of The Milwaukee Company. The purpose of this newsletter is to provide you, the individual investor, with information that will help you invest more wisely and with greater success.

In each issue we’ll share our views on key aspects of economics, financial markets, and policy decisions in Washington and elsewhere that are informing our thinking on investment strategy and risk management.

I hope you find Perspectives + Prospects to be interesting and useful. I would greatly appreciate your feedback and suggestions.

The U.S. stock market ended the week higher with hopes that the worst of the coronavirus pandemic is behind us.  Despite this optimism, interest rates still moved lower with the 10-year treasury yield falling from 0.73% to 0.65% as the coronavirus’s impact on the economy begin to materialize in economic data.  This also resulted in a flattening of the yield curve as the spread between the 10-year treasury yield and the 2-year treasury yield narrowed from 0.50% to 0.45%.  The price of safe-haven gold fell 2.6% to $1,694 an ounce amid hopes of treatment for the coronavirus.  The price of crude oil continues to struggle, falling over 20% to $18.12 a barrel, as falling demand and concerns of oversupply still linger.

Extraordinary crises call for extraordinary stimulus, or so the Federal Reserve has decided. In the face of a recession that arrived with unprecedented depth and speed, the central bank has rolled out its most ambitious monetary stimulus program since its 1913 founding—in record time. In comparison with the months-long timeline to respond to the 2007-2009 crisis, the Fed has reacted in the course of weeks this time.

The catalyst for the central bank’s speedy response, of course, is the severity of the economic decline, triggered by the Covid-19 pandemic. There’s never a good time for a crisis, but the Fed was in an unusually tough spot when the economy was torn asunder in 2020 and so the central bank was forced to embrace alternative policy tools.

Consider that bank’s target rate was roughly 1.6% (daily effective Fed funds rate) when it began focusing on damage control in early March. Normally, the Fed cuts interest rates by several hundred basis points. In the 2008-2009 recession, the target rate was reduced by roughly 500 basis points over a period of months. By comparison, the Fed’s potential rate cut as of early March was limited to 160 basis points, assuming that going negative was off the table.

With rates already low by historical standards, some pundits warned that the Fed was out of monetary ammunition (or close to it). Fed Chairman Jerome Powell and company proved otherwise by purchasing corporate bonds, which included – for the first time – junk credits. News of the policy, announced on April 8, sparked a monster rally in high yield bonds.

It’s fair to say that risk assets generally have been propped up by the Fed. Absent central bank intervention, stocks and bonds (other than Treasuries) would likely be suffering far-deeper drawdowns. 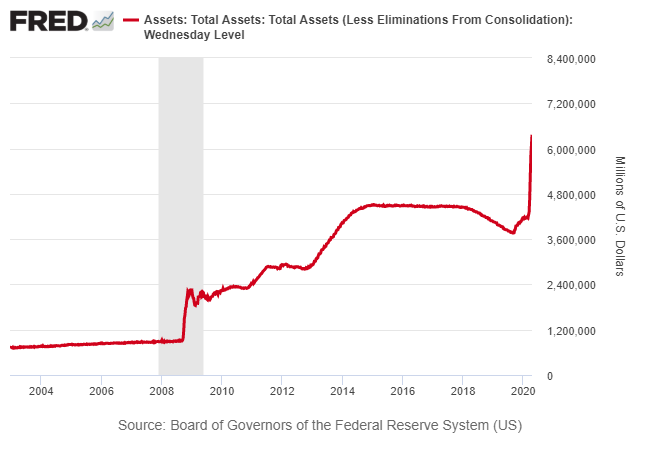 The Fed’s efforts will keep the US economy from imploding and instead limit the damage to a severe recession. In truth, no one’s sure how the central bank’s grand experiment will fare. Critics of the Fed’s actions worry that spending trillions of dollar to avert the forces of financial gravity is trading one calamity for a bigger one down the road.

The Fed’s balance sheet has surged almost 40% to nearly $6.4 trillion in just four weeks as of April 15. By some accounts, even higher realms are coming. Critics of the ultra-dovish policy say it risks an inflationary spiral at some point.

Meanwhile, moral hazard has effectively been banished by the Fed’s latest action, potentially introducing another set of risks.

Is the pursuit of market and macro equilibrium worthwhile?  The answer depends on the outcome. If the Fed’s actions forestall a meltdown in the markets and the economy, there’s a case for arguing that Powell and company made the right move. But even if the policy choice is correct, putting the genie back in the bottle may prove difficult if not impossible.

In any case, it’s unclear how this crisis plays out. The Fed’s soaring balance sheet may or may not be a reasonable price to pay to avert meltdown. But there’s another perspective to consider: Did the Fed spend trillions to create “zombie” companies that will create long-term headwinds for the economy once the crisis has faded?

Only time will tell. On the plus side, the Fed’s monetary medicine appears to be effective, so far. But counterfactuals are impossible to prove. Would the economy and the markets be in worse shape with a less aggressive monetary program? Maybe. But we’re still in the early stages of what’s still expected to be the worst recession since the Great Depression. The real test for the Fed — and the country – has yet to arrive.

Inflation risk will rise once the economy recovers… The timing of the economic rebound, and the degree of snapback, are open for debate. Once there’s a genuine recovery underway the potential for higher inflation will rise along with economic activity.

In theory, both will fare well in an inflationary environment because each offers the capacity for generating attractive real returns that adjust with the shifting inflationary environment. In practice, however, the current price you pay for accessing these hedges matters — a lot. On that note, REITs and TIPS present two very different opportunities these days.

Start with REITs. A proxy fund—Vanguard REIT (VNQ)—is trading at a 4.5% trailing 12-month yield, according to Morningstar.com. There’s no guarantee that the current yield will prevail in the future, but the risk of uncertainty is somewhat mitigated with a hefty margin-of-safety spread relative to the benchmark 10-year Treasury’s meager 0.65%.

TIPS, by contrast, are already priced for perfection and should be viewed cautiously. A 10-year TIPS, for example, is trading at a negative 0.36% current real yield. Not an attractive proposition, to put it mildly, if you buy and hold till maturity.

Contrarians can argue that a massive bout of deflation would bail you out by generating sizable capital gains for TIPS. True, which raises the question: Are you expecting deflation (or its milder cousin, disinflation)?

In a word, yes. But deflation/disinflation will likely be a temporary affair that will fade once the coronavirus recedes. In fact, expecting deflation—even in the short-term—is a long shot since the Federal Reserve will almost certainly move monetary heaven and earth to keep pricing pressure positive.

In any case, once the economy stabilizes and recovers from the self-induced coma that’s currently weighing on macro activity, inflation looks headed for an upside bias. Why? Let us count the ways, starting with rising deficits, a bull market in debt and a super-dovish Federal Reserve. For good measure, throw in a newly revived capacity in Washington for fiscal stimulus measured in trillions of dollars and one can argue that the stars are aligning for an acceleration in inflation… eventually.

Timing, as always, is uncertain. That’s where an attractively priced inflation hedge comes into play. Earning a relatively fat dividend yield in REITs (VNQ), and one that’s miles above the 10-year Treasury’s current yield, presents an intriguing proposition while we monitor inflation risk. 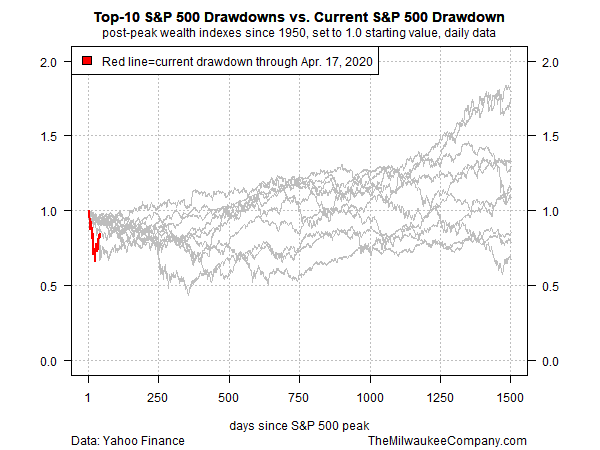 How does the current market correction compare with history?… The stock market’s decline is one of the sharpest on record, but history reminds that the current path of the S&P 500 Index’s drawdown isn’t unprecedented. Comparing the peak-to-trough decline against the deepest drawdowns since 1950 points to a familiar path in the latest fall from grace. Although no one will confuse the current slide as modest, at least one previous decline suffered an even deeper loss at this point in the drawdown. Then again, these are early days. If history’s a guide, the road to recovery could be long and volatile. In the 2008-2009 recession, the S&P’s drawdown unfolded over several years. Once the market hit bottom in March 2009, climbing out of the hole took four years to regain the previous high. The lesson: patience is not only a virtue, it’s a fact of life for surviving financial crises.

“Risk and time are opposite sides of the same coin, for if there were no tomorrow there would be no risk.  Time transforms risk, and the nature of risk is shaped by the time horizon: the future is the playing field.”